If Tombstones Could Talk

Home > Books > If Tombstones Could Talk 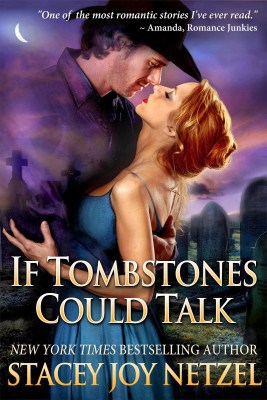 Had someone asked Melanie Sparks if she believed in ghosts, she'd have laughed before voicing an emphatic "No."
Then she takes a walking tour of the cemetery in her new hometown of Lindeman's Crossing, Colorado and meets one of the residents face to face.

If Tombstones Could Talk

Had someone asked Melanie Sparks if she believed in ghosts, she’d have laughed before voicing an emphatic “No.”

Then she takes a walking tour of the cemetery in her new hometown of Lindeman’s Crossing, Colorado and meets one of the residents face to face. The story behind Andrew Lindeman’s tragic death after the Pike’s Peak Gold Rush in 1859 triggers dreams in which she relives his last moments.

Drawn to the handsome ghost, attraction builds, and she resolves to clear his tarnished name. A passionate kiss sets his spirit free, but will Melanie lose her heart forever?

**ebook contains excerpts of author’s other works at the end.

She started with the trail next to the river behind her cottage. The walk along the South Platte
River settled her nerves until she realized it’d looped through the park and led her back to the cemetery. Her feet rooted to the spot outside the gate as she stared intently at that one specific shaded gravesite.

Everything looked normal. No shadow figures. No shimmering air. No voices in her head.

Most likely her subconscious had been playing with her yesterday. Her imagination had been in overdrive after all the wonderful history she’d learned.

Still hesitant, Melanie entered the deserted grounds and followed the path John had led the senior group along the day before. Every so often she snuck a glance toward the black granite, until at the end, she once again stood in front of the stone.

Squatting down, she reached to touch the old, worn stone sunk in the earth.

Cold. As it should be.

Her gaze rose to the other one looming in front of her. Nervous anticipation mixed with dread, raising goose bumps on her arms like yesterday. Much as she didn’t want to touch its smooth surface, she had to make sure. Her hand trembled slightly as she extended her arm.

Relief tingled through her entire body.

With one finger, she traced the A in Andrew, then flattened her palm over the name.

In a single instant, the granite warmed, almost to the point of burning her flesh. She yanked her hand back with a gasp, then nearly jumped out of her skin when a male figure materialized out of thin air right before her eyes.

Dark, glittering eyes locked on her. A scream froze in her throat and she found she couldn’t breathe.

If she stayed still, would it go away?

Her lungs burned. She needed oxygen or she’d faint. Rising slowly, she drew in a deep breath of air, then concentrated on repeating the process until her legs steadied. All the while, her mind registered details.

The man of her dreams. Tall. Dark, wavy hair, worn long enough to hang over his forehead and brush the collar of his black shirt. Eyes that at first glance appeared black but now she saw were a sexy slate gray. His thick eyebrows shadowed them, making them seem darker. A hint of a five o’clock shadow lent a sinister air, yet she wasn’t truly afraid of him.

“You can see me.” The husky accusation washed over her.