More Than a Kiss

Home > Books > More Than a Kiss 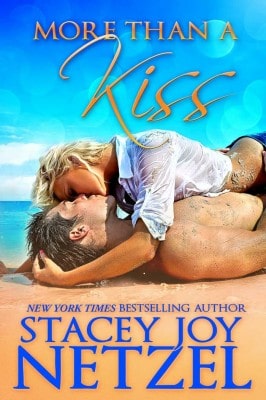 All reporter Sadie Barton wants is to be taken seriously and judged on her own merits, not her stepfather's money. She and her actress sister left Wisconsin to get out from under his controlling thumb and leave behind the malicious whispers that they're no better than their gold-digging mother. But California isn't all sun and fun, and paying the rent while trying to prove herself is harder than she ever imagined.

All reporter Sadie Barton wants is to be taken seriously and judged on her own merits, not her stepfather’s money. She and her actress sister left Wisconsin to get out from under his controlling thumb and leave behind the malicious whispers that they’re no better than their gold-digging mother. But California isn’t all sun and fun, and paying the rent while trying to prove herself is harder than she ever imagined.

…is more than a kiss…

Something about Sadie drew self-made millionaire Zach Robinson–and it wasn’t just the amazing kiss they shared as impromptu actors in his company’s commercial. He’s used to women being interested in his wealth, and Sadie’s fierce independence is an enticing breath of fresh air. He’s falling fast–until his brother suggests acting runs in her family and Sadie might not be exactly what she seems…

“You should’ve iced this right away.”

The first touch of the cold cloth on his sore lip triggered a reflexive jerk away. He hissed air through his teeth before relaxing to let it out slow.

She raised her other arm and laid her palm along his stubble covered jaw to hold him still. It seemed strange, her fussing over him like this when he could take care of himself. Warmth spread from her touch and started his heart thudding in his chest. As if someone smacked him upside the head, he realized this was the closest she’d gotten to him since they’d kissed on the set of the commercial. Voluntarily, anyway.

With her concentration fixed on his mouth, Zach let his gaze wander over her long, down-swept lashes, smooth skin, and enticing lips. Discomfort shifted to center below the waistband of his shorts. Didn’t help that she had the corner of that lush, lower lip caught between her teeth again. He wanted to nibble.

When he raised his gaze to find her watching him, his pulse stuttered. Color stained her cheeks, but she didn’t break the connection.

“I didn’t thank you yet,” she said softly.

His grip tightened on the cold bottle in his hand. Shut up, idiot! Let her thank you however she wants.

“Not for taking me to get Gemma, I didn’t. Or helping us get out of there and taking the hit for us.”

“Two,” he reminded, throwing in a grimace for good measure. “I took two hits.”

A smile tugged the corners of her mouth upward. “Don’t worry, I was counting.”

She lowered the hand with the ice pack to rest on his shoulder, bracing herself as she leaned closer. The minty freshness of her breath filled his nostrils and he swallowed hard at the thought of tasting it on his tongue.

Zach held still, afraid to even breathe in case she changed her mind. Anticipation sizzled through his body and what had been a refreshing ocean breeze now became a teasing caress on his heated skin.

Sadie’s lashes lowered as she closed her eyes and pressed her lips to his. Stomach muscles tightened in his effort to lean into the kiss, but she pulled away.

Well, damn. He had two chances here and one was already over? To hide his disappointment over the all too brief contact, he joked, “That’s one.”

The thumb of her right hand whispered across his lips. “How does your mouth feel?”

He barely had a chance to draw a breath before she leaned in for take two.

“From the classroom to the boardroom, directors to ducklings, Stacey Joy Netzel takes you on a fun, romantic joyride with two lovable people who are just trying to do the right thing in the cutthroat world of journalism and big business.” ~ Delia DeLeest, author of NOT LOOKING FOR TROUBLE