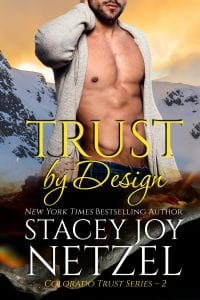 Enjoy this first kiss scene from TRUST BY DESIGN!

Cinderella and Prince Charming…brought together by chance, or design?

Interior Designer Gina Allen is flat broke thanks to a shady assistant who didn’t pay the taxes. Now she has no choice but to accept a job from the very rich, very handsome CEO Dean Daley—even though he’s accused her of conspiring to steal his software designs.

Keep your friends close and your enemies closer—that’s why Dean hires his rival’s ex-girlfriend. If he can use her to prove Jack is behind the spiraling downfall of his company, he might be able to turn things around before losing everything.

Dean, however, doesn’t count on Gina being everything he never expected, or his heart being in more danger than his business. Will the trust they’ve built be enough to keep them together—or will an unexpected betrayal tear them apart…and possibly cost them their lives?

Without giving herself a chance to change her mind, she smiled up at him through her lashes while moving in close to lay her palms on his chest. Firm muscles registered as she lifted her five foot-three inch frame onto her tiptoes and ran her hands up to his shoulders so she could link her fingers behind his neck.

His eyes widened in surprise, but as she pulled his head down toward hers, he offered no resistance.

The instant his mouth touched hers, electricity jolted clear down to her toes. Her initial plan to sister-kiss him and leave was fried in a single heartbeat. His lips moved against hers, and in the next second, strong arms encircled her ribs. He pulled her against the full length of his body while his tongue slid along her lips, seeking entrance.

Caught up in the unexpected sensations pulsing through her, she opened to him with a soft sound of surprise and met the first intimate exploration of his tongue with her own, then the next, and the next. He slid a hand up into her hair and tilted her head to deepen their connection even further. His hard body against hers was so warm she’d swear flames licked her flesh from chest to mid thigh.

Her senses were reeling when she gradually became aware of loud cheers and catcalls from the crowd around them.

What the hell am I doing?

She pushed against the stranger’s chest, pulling back even as he leaned forward in an attempt to prolong the kiss. Then it seemed he also became aware of the encouragement from their audience and released her with obvious reluctance.

Those brown eyes of his met hers, darker now than before.

Shit. During the past ten minutes, she’d never once considered what would happen after the kiss. Now what?

He opened his mouth, but before he could speak, she panicked and spun for the door. Showing Jackson she was moving on was one thing, losing all common sense in the process was another.

As she pushed through the crowd, a hand grabbed at her arm.

She jerked free and felt her sweater whisk across her skin while she moved faster through the swell of bodies threatening to cut off her escape. Once outside, she only spared a quick backward glance before sprinting for her car.

Dean Daley fisted the soft material in his hand and shoved through the club door to the parking lot. His gaze scanned the area, focusing on anyone leaving, but the woman who’d just kissed him senseless was nowhere to be seen. Disappeared without a trace.

Damn. After a kiss like that, he wanted her name.

He looked down at the maroon sweater as details from the past minute flooded back. Violet-tinted eyes. Brown hair. Maybe red? It’d been hard to tell under the club lights, but either way, it’d been silky as all hell. She’d felt so small in his arms. Soft and fragile, yet strong as she’d drawn his mouth down on hers.

Maybe she was. She’d dashed through the crowd so quick he wondered if he’d imagined the whole thing.

The sweater clutched in his fingers told him he hadn’t. He brought it up to his face and inhaled the fresh scent of flowers combined with a mysterious hint of spice. Definitely real.

When he realized he stood there smelling some stranger’s sweater like a lovesick puppy, he quickly lowered his hand to his side. Heat flooded his face while muted music registered on his conscious, and he turned to go back inside. When he opened the door, the noise level blasted his eardrums.

At the bar, his vice president met his gaze with a lift of his eyebrows. “Did you catch her?”

“Nope.” Dean dropped the sweater onto the bar and grabbed his beer.

“Never saw her before tonight.”

“Then what the hell was that?”

“Damned if I know.” He took a swig from his bottle. As he lowered his hand, he recalled she hadn’t been alone. He turned to see if her friends were still sitting at their table just as a guy reached to set drinks down while two new women claimed the empty chairs. He took a moment to scan the crowd. He thought she’d been sitting with a blond and a brunette, but seeing as he’d been focused on the mystery girl, he couldn’t be sure and certainly wouldn’t be able to pick them out of the crowd.

“That hers?” Mike’s question drew his attention back to see him eyeing the sweater.

“You got yourself your very own Cinderella.”

~~~
Get your copy of Trust by Design HERE

Posted in:
Tagged:
bookmark the permalink

Your email address will not be published. Required fields are marked with an *