Cinderella and Prince Charming...brought together by chance, or design?
Interior Designer Gina Allen is flat broke thanks to a shady assistant who didn’t pay the taxes. Now she has no choice but to accept a job from the very rich, very handsome CEO Dean Daley—even though he’s accused her of conspiring to steal his software designs.

Cinderella and Prince Charming…brought together by chance, or design?

Interior Designer Gina Allen is flat broke thanks to a shady assistant who didn’t pay the taxes. Now she has no choice but to accept a job from the very rich, very handsome CEO Dean Daley—even though he’s accused her of conspiring to steal his software designs.

Keep your friends close and your enemies closer—that’s why Dean hires his rival’s ex-girlfriend. If he can use her to prove Jack is behind the spiraling downfall of his company, he might be able to turn things around before losing everything.

Dean, however, doesn’t count on Gina being everything he never expected, or his heart being in more danger than his business. Will the trust they’ve built be enough to keep them together—or will an unexpected betrayal tear them apart…and possibly cost them their lives?

Caught up in the unexpected sensations pulsing through her, she opened to him with a soft sound of surprise and met the first intimate exploration of his tongue with her own, then the next, and the next. He slid a hand up into her hair and tilted her head to deepen their connection even further. His hard body against hers was so warm she’d swear flames licked her flesh from chest to mid thigh.

Her senses were reeling when she gradually became aware of loud cheers and catcalls from the crowd around them.

What the hell am I doing?

She pushed against the stranger’s chest, pulling back even as he leaned forward in an attempt to prolong the kiss. Then it seemed he also became aware of the encouragement from their audience and released her with obvious reluctance.
Those brown eyes of his met hers, darker now than before.

Shit. During the past ten minutes, she’d never once considered what would happen after the kiss. Now what?

He opened his mouth, but before he could speak, she panicked and spun for the door. Showing Jackson she was moving on was one thing, losing all common sense in the process was another.

As she pushed through the crowd, a hand grabbed at her arm.

She jerked free and felt her sweater whisk across her skin while she moved faster through the swell of bodies threatening to cut off her escape. Once outside, she only spared a quick backward glance before sprinting for her car.

Dean Daley fisted the soft material in his hand and shoved through the club door to the parking lot. His gaze scanned the area, focusing on anyone leaving, but the woman who’d just kissed him senseless was nowhere to be seen. Disappeared without a trace.

Damn. After a kiss like that, he wanted her name. 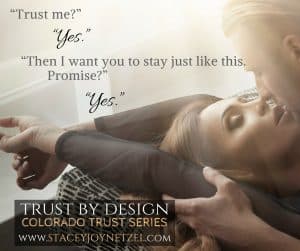