In their search for a priceless jeweled cross, lines quickly blur between the con and the real deal. Can love survive a double-cross when the mystery is unlocked?

The cross is the key to a priceless treasure…will it secure their future, or doom them forever?

One year after being shot in Italy, Rachel Sanders travels to Venice in search of the jeweled cross that triggered a heartbreaking family betrayal. Determined to keep the treasure from her mother’s greedy hands, she’s caught off guard by the interference of an irresistibly charming rival. His unexpected offer to work together might be self-serving, but she’s thrown into a precarious situation where she can’t refuse.

Nick Marshall has a family legacy to recover and a score to settle. Anyone with the last name Sanders is fair game—until he meets Rachel. She’s gorgeous, smart, sexy, and doesn’t buy one word of his cover story. When their attraction combusts, each kiss makes his deception burn like acid, and he begins to question his end goal.

But they’re not the only ones after the cross. Ruthless players determined to recover the treasure first put Nick and Rachel’s lives at risk. Despite all the secrets and lies, lines quickly blur between the con and the real deal. Can love survive a double-cross when the mystery is unlocked?

“From the moment the book begins until its exciting conclusion, it’s all blood-pounding chases, near misses with death, and heart-stopping romance.” ~ Adria’s Romance Reviews

“Santo means saint,” he said. “Was there a name to go with that?”

“No.” She frowned because she thought it was a name. In the next instant, she turned to face him with determination. “But we are not talking about that. How did you know where I was? I made sure you didn’t follow me.”

Alarm flashed across his expression. His gaze searched hers for a tense moment, then he visibly relaxed and shrugged his shoulders. “You seem like a smart girl. I figured the library would be your next logical step in the search, so I gave it a try, and here you are.”

She almost laughed, but was way more annoyed than amused. “Do women really fall for the bullshit you feed them?”

She turned up her nose. “Well, I am a smart girl, and it’s insulting. Try again.”

“Okay, fine,” he huffed with an exaggerated sigh. “Being the creepy stalker I am, I put a tiny little tracking device in your bag so I could follow you. Is that more believable?”

“Actually, yes. Thank you.” He probably meant it to sound so outlandish she wouldn’t believe him, but she was going to find the damn thing the moment she pulled her bag out of the locker. “Next question, who are you working with?”

Her careful watch caught the subtle tightening of his muscles as his tension returned.

“What makes you think I’m not in this for myself?” He reached to casually flip her pencil into a spin on top of the wooden table.

“Oh, I don’t doubt you’re in it for yourself, but I know someone sent you after my father’s letters because you couldn’t have known about them yourself.”

She reached forward and slapped her hand on top of the pencil to stop the irritating sound. He raised his eyebrows, and she had to avoid taking too deep a breath. “My brother didn’t know about the letters Dad sent until after his whole thing with you in Rome was over.”

“You sure about that?”

“Yes.” But she wasn’t one hundred percent. She and Ben had talked on the phone in the middle of his crazy journey from Milan to Rome, just before he made her promise to go stay with Halli and Trent in California until he returned to the States. They had talked about Dad’s codes, but she honestly couldn’t remember if the letters came up. Had he been surprised when she first mentioned them during their talk at the villa?

Then she realized if he had been, it didn’t matter. Even if she’d mentioned them to Ben before that, there’s no way he would have told Nick.

She tried a different tactic. “Tell me who you’re working for and I’ll consider your offer.”

“You’re already considering it, so I’m not really getting anything out of that deal.”

“That’s how it works with you? You only give if you get?”

“Not in everything.” He paused just long enough, then lifted his gaze to hers. “But in this, yes.”

Heat flooded through her at where her mind went for the first half of his low, suggestive statement. His cocky grin told her he knew exactly what she was thinking. Damn.

She stood and gathered her notebook and pencil, then reached for the book to return to Gianna.

Nick reclined back in his chair. “Have dinner with me tonight, and I’ll answer your questions.”

Dinner with him? She let her gaze skim the long, lean body sprawled out before her, and pictured the restaurant she’d eaten at last night. Wine, candlelight, romantic Italian music.

Hugging her notebook to her chest, she faced him and leaned her hip against the table. “Just dinner?”

It wasn’t like she would actually go, but she couldn’t fake-agree too fast, either.

He sat up, then stood, a mere two feet away. Then one. His hand rose to slide along her bare arm in a warm, sensual caress. “Unless you want more?”

Join the treasure hunt through Venice – get your copy of CONNED today! 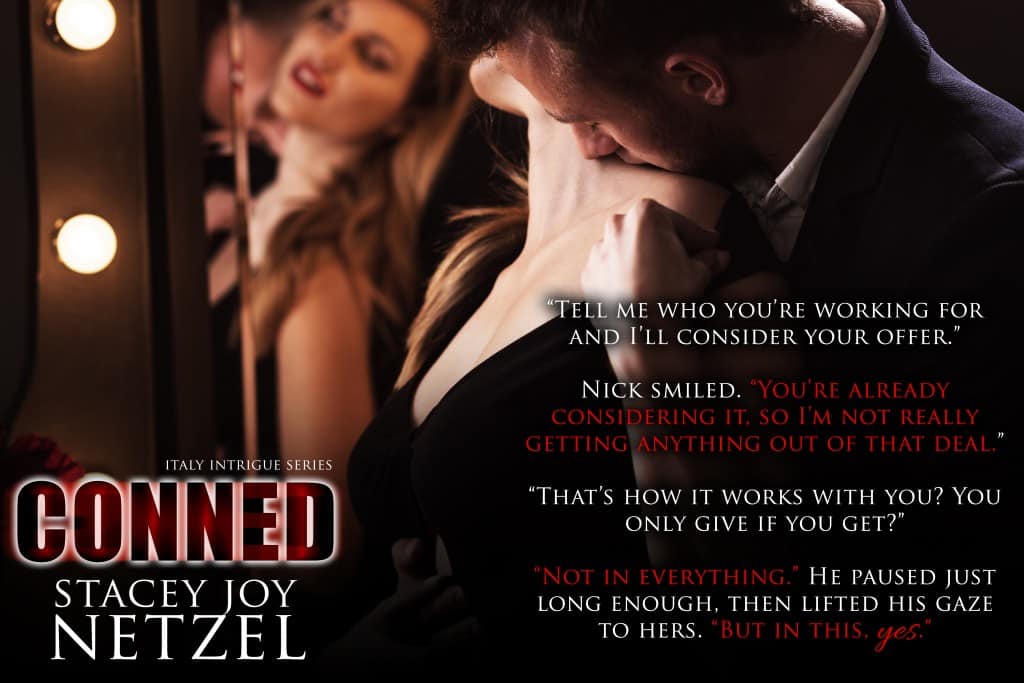 BETRAYED
Disclosure of Material Connection: Some of the links in the page above are "affiliate links." This means if you click on the link and purchase the item, I will receive an affiliate commission. I am disclosing this in accordance with the Federal Trade Commission's 16 CFR, Part 255: "Guides Concerning the Use of Endorsements and Testimonials in Advertising."
⇧
wholesale jerseys Nike NFL jerseys Wholesale jerseys From China Wholesale NFL jerseys Cheap NFL jerseys From China Cheap NFL jerseys