When a hyper-organized Wisconsin TV producer maps out her Italian vacation, getting kidnapped by an impossibly gorgeous Hollywood movie star caught up in a murder scandal isn't on the itinerary. Then again, neither is falling in love.

This time the action isn't scripted…and the danger is real.

This time the action isn’t scripted…and the danger is real.

Television producer Halli Sanders is on the trip-of-a-lifetime to Italy. Not on her itinerary? The disappearance of her siblings, dodging bullets during a high speed car chase, and being kidnapped by a sexy movie star. And that’s just in the first three hours!

A-lister Trent Tomlin has put his career on hold to investigate his brother’s suspicious death in Italy. When Halli unwittingly films the murder of the retired cop working with him, Trent has no choice but to abscond with her and the recording. But the killers will do anything to get the incriminating evidence—even hold Halli’s family as collateral.

Thrust into the role of real-life hero, Trent finds himself falling for this Plain Jane, whose beauty blossoms with every challenge they face. He needs the evidence to put the murderers behind bars. Halli needs it to rescue her siblings. Their attraction is heating up, but can they write a happy ending for this all-too-real adventure?

“…starts off right away, and every page that follows is packed full of excitement that will keep you on the edge of your seat.” ~ Danielle, Book Reviewer

Plain was the first word that came to mind when Trent Tomlin got a good, close-up look at the girl dressed in baggy black pants and an oversized black T-shirt. Except for her eyes. Almost the exact color of his car, they blazed with anger—if the shrill tone of her voice were any indication.

Because he couldn’t afford to waste a second, he slipped into his carefree, celebrity character while pushing up his Ray Bans to flash his trade-mark, million dollar grin past the two day’s worth of camouflaging scruff on his jaw.

“Only in the movies, darlin’.”

That always got ‘em, too, the good-ol’-boy, southern drawl. Didn’t matter he’d been born and raised in northern Oregon, he had a natural talent for mimicking any accent. After just a few words, he easily placed her in mid-west United States. American tourist. Perfect. It also explained why she’d been video taping in the wrong place at the wrong damn time. The opposite of his brother, and if he could help it, the opposite outcome.

Her cheeks flushed. “Of course. I know your real name. Sorry. It’s just—I’m…ah…I’m…”

Hell, he’d better speed this up. “Can I give you a lift?”

“W-what?” She craned her head around, as if he might be speaking to someone else.

Resisting the urge to check over his shoulder, he kept his gaze trained on her. “You look lost. Hop in and I’ll give you a ride.”

Her throat convulsed, and though he wouldn’t have thought it possible, her blush deepened to crimson. A fleeting smile revealed even, white teeth.

She lifted a hand to tuck a strand of straight brown hair behind her ear as she searched back and forth along the road.

Trent cast his own quick glance in the rearview mirror, pressure squeezing his body like a starving boa constrictor as he searched for the men who’d spotted her and her camera across the bay. By his amateur calculations, he figured he had about three more minutes. If they were lucky.

Pushing up to sit on the headrest, he prepared to turn on the superstar charm that had brought him such success at the box office.

“I’m waiting for my brother and sister,” she said before he could speak.

So that’s who’d driven off as he watched the scene unfold from one street above and behind her. He lifted a tense shoulder in a careless gesture. “Quick spin around town, and I’ll bring you right back. They’ll never know you were gone, sugar.”

Her eyebrows drew together above those deep blue eyes. Damn. He fought his own frown. Based on previous experience with star-struck women, she should’ve jumped in at the first invitation. Wasn’t it just his luck, this one had common sense.

Leaving the car running, he swung his legs over the door and rounded the front of the convertible. His heart thumped with each step as he tried to figure out the best way to get her out of this mess. It was one thing when he was following a script, but how the hell did one orchestrate a rescue in real life when the rescuee wouldn’t cooperate and he had no time to explain the danger? It’s not like he could play her the recording tucked in his pocket.

The girl backed away from his approach. He fought back rising apprehension and forced an easy smile.

“Look, I appreciate the offer, Shain, but—”

“I need you to get in the car.” As an afterthought, he added, “Please.”

He used her glance down the road as cover for his own. Still time, yet his control slipped. “Seriously. Get in.”

The sharp command widened her eyes. Suspicion darkened them to navy, and she took another step backward. Then her shoulders squared while her gaze narrowed with determination. “No.”

The right taillight on his Alfa Romeo exploded. Trent ducked reflexively as bits of plastic flew in all directions. Adrenaline spiked through him, but other than a sharp reactive jerk, the girl just stood there holding her camera. Trent lunged forward, grabbed her arm and hauled her toward the car.

“Hey—let me go!” She pulled back with surprising strength.

He picked her up and shoved her head first into the passenger seat, then vaulted over her to slip behind the wheel. Heartbeat thundering in his ears, he gunned the gas with a sickening grinding of gears before the convertible shot out into traffic amidst screeching tires and blaring horns.

Dive into action & romance, Italian style with Stacey Joy Netzel – get your copy of KIDNAPPED today! 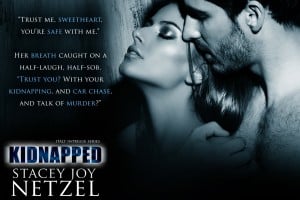 CONNED
Disclosure of Material Connection: Some of the links in the page above are "affiliate links." This means if you click on the link and purchase the item, I will receive an affiliate commission. I am disclosing this in accordance with the Federal Trade Commission's 16 CFR, Part 255: "Guides Concerning the Use of Endorsements and Testimonials in Advertising."
⇧
wholesale jerseys Nike NFL jerseys Wholesale jerseys From China Wholesale NFL jerseys Cheap NFL jerseys From China Cheap NFL jerseys