Ad-exec Jordan Blake believed image was everything—until his parents were convicted of murder, the family company went bankrupt, and his excessive drinking and arrest fueled the tabloids. When lawyer David Barnes offers representation in exchange for assistance in reopening his Colorado mountain resort, Jordan has no choice. It’s help or jail.

Ad-exec Jordan Blake believed image was everything—until his parents were convicted of murder, the family company went bankrupt, and his excessive drinking and arrest fueled the tabloids. When lawyer David Barnes offers representation in exchange for assistance in reopening his Colorado mountain resort, Jordan has no choice. It’s help or jail.

Hollywood wild child Lexie Sinclair disappeared by changing her name, joining the army, and marrying a soldier. One night, her husband wrapped their car around a tree, killed himself, and left her permanently injured. For the past few years she’s been content to live in peaceful obscurity as caretaker of David’s defunct resort.

Jordan’s arrival exposes Lexie’s true identity and brings her dead husband’s ‘friends’ calling. Jordan offers to help, but the shadow of his drinking leaves Lexie reluctant to trust. Can they conquer their fears and find the courage to face the criminals—and the world—together?

Lexie stared at Jordan Blake staring at her. If she thought he was better-looking from across the street, up close the man was lethal. Tall, with dark blond hair, thick eyebrows and thicker lashes to frame the incredible brown eyes focused on her. He filled out his T-shirt under his brown leather jacket, stretching the material taut across his chest.

But she wasn’t interested in gorgeous, and the only reason her heart rate picked up was because he’d ticked her off. A gun, indeed.

Instead of snapping at him as she wanted, she managed a fairly polite, “May I help you?”

“I’m here to see David Barnes,” he said, his voice as stiff as his posture.

No one ever came here for David. He set up client appointments at the Boulder office. Lexie tried to relax, but her shoulders remained tense, and her pulse refused to settle down.

“He hired me to do some work.”

“He hired you? You mean you’re not a client?”

“I don’t need a lawyer,” he ground out, sounding offended.

She almost scoffed as she crossed her arms in front of her. “What work?”

His expression told her his business with David was none of her business. “And you are?”

“What work?” she demanded, dread beginning to creep in behind her bravado.
They stared at each other until he backed down first, surprising her.

“I’m here to inspect the cabins, see if any need major repairs before winter.”

He quit there, but Lexie knew there was more he wasn’t telling her. She couldn’t believe David was going ahead with the reopening after only one conversation about it! Hurt followed on the heels of her indignation. She knew it was his decision, his resort, but didn’t he know she wasn’t ready for this yet?

New people every week, the chance of being recognized. Even now, without her glasses on, nervousness clawed her insides. And then the—

Jordan Blake leaned a hip against the railing of the stairs and crossed his arms over his chest, mimicking her posture. “You decide yet?”

“Decide what?” she asked with a frown.

“What excuse you’re going to give instead of simply admitting David isn’t here.”

Lexie straightened, annoyance shooting heat straight to her cheeks. Her right leg throbbed as she distributed her weight evenly on both feet for maximum height and caught his gaze. “He isn’t here. And if he truly did hire you, that means I’m your boss until he gets back.” What do you got to say to that, hot shot? 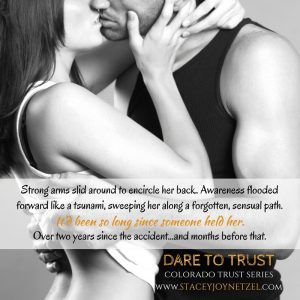