Illusion of Trust, Book 7 of the Colorado Trust Series

Olivia Brenner’s family is being ripped apart. Cancer took her mother a few years ago, and now her father’s been arrested for murder. She has evidence to prove his innocence—if she can stay alive long enough to get it into the right hands. When a sexy stranger saves her life, she has no choice but to accept his help. But can she trust a man who doesn’t believe family is worth fighting for?

Nate Wade has been betrayed time and again by those who are supposed to care the most. He protects himself by pushing everyone away, until one night with Olivia flips his world upside down. The vulnerable-yet-feisty redhead challenges everything he believes about the dreaded F-word, and he’s shocked to discover he cares more than he ever imagined possible.

Now he’ll risk everything to keep her safe and prove to the both of them he is worthy of her heart—and the love of his own family.

Nearing his truck, he dug his keys from his pocket and rounded the back end for the driver’s side. He thumbed the fob to unlock the doors. Parking lights flashed as the locks opened with a muted thunk. A dark smudge over the rear wheel well caught his attention as he reached for the door handle. In the dim light from the overhead lamp a dozen yards away, it looked like someone had smeared oil across the side of his freshly washed truck.

He frowned, yanking the door handle in annoyance only to have his fingers slip free and throw him off-balance for a second. His frown deepened as he lifted his hand into the light to grimace at the slick, sticky grease that’d transferred from the handle to his skin.

His heart kicked hard against his ribs with the realization the substance on his fingers wasn’t oil or grease, but blood.

A muffled sob whirled him around in the unusually empty lot. He’d finished his exam early, so while there were plenty of vehicles, it seemed the rest of the students were still inside.

Focusing in the direction the sound had come from, he held still and waited. The desperate sound of a door handle jerking up and down broke the quiet. Then a soft thud, and a low whimper of frustration.

Keys fisted in his hand, he eased toward the front of the vehicle next to his truck, keeping to the shadows with his heart beating high in his throat. Two cars away, a small, slim figure in a hooded sweatshirt wearing a navy blue backpack moved from the driver’s side of one car to the passenger side of the next. Leaning heavily against the vehicle, the person tried the handle before bracing a hand against the hood to move to the other side.

Another muffled sound of distress was laced with panic.

Nate moved closer. When he noticed the smear of blood the person left behind, concern became alarm.

At the first sound of his voice, the person whirled around with a choked cry. The hood on the sweatshirt slipped backward, and by the time Nate finished his question, he found himself face to face with the redhead from the newspaper photo—and the business end of her gun. 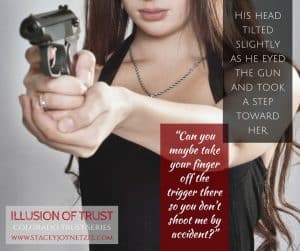 Vow of Trust
Look Inside
Disclosure of Material Connection: Some of the links in the page above are "affiliate links." This means if you click on the link and purchase the item, I will receive an affiliate commission. I am disclosing this in accordance with the Federal Trade Commission's 16 CFR, Part 255: "Guides Concerning the Use of Endorsements and Testimonials in Advertising."
⇧
wholesale jerseys Nike NFL jerseys Wholesale jerseys From China Wholesale NFL jerseys Cheap NFL jerseys From China Cheap NFL jerseys