Sweet twenty-seven and never been kissed. Well…no one’s ever accused Marley Wade of being sweet. Raised in the world of construction by a strict father, Marley knows what it takes to succeed as a general contractor in a man’s world. The last thing she needs is an employee who makes her feel soft and feminine.

Sweet twenty-seven and never been kissed. Well…no one’s ever accused Marley Wade of being sweet. Raised in the world of construction by a strict father, Marley knows what it takes to succeed as a general contractor in a man’s world. The last thing she needs is an employee who makes her feel soft and feminine.

A new co-owner of Hunter Construction, Justin Blake goes undercover on Marley’s crew to discover the truth behind his grandfather’s death. But he didn’t count on an instant attraction to his boss—or for it to develop into deeper emotions. When a blackmailer threatens to expose the twenty-five-year-old secrets that link his family and Marley’s, Justin realizes the truth could not only shatter a future with her, but his entire family as well.

“Shattered Trust has everything a fantastic book should have, romance, suspense, betrayal, and humor in all the right places.” ~ Emily, Single Title Reviews

Justin Blake’s gaze narrowed on the trailer bathed in bright light as the July sun rose over the city of Boulder, Colorado. Not only did he have to pose as a construction worker in his newly inherited company, but he’d have to take orders from a woman who obviously didn’t know what she was doing.

He wished he’d had more time for research before jumping in like this, but as his brother, Jordan, pointed out, they had to act fast. Only a small window of opportunity existed in which to discover if the name Jordan had found scratched on the paper clutched in Granddad’s hand had anything to do with his death.

It’d barely been legible, but the first three letters appeared to be Mar and the last spelled Wade. Jordan had found two possibilities: Mark Wade, who it turned out had died three months ago in a car accident, and his daughter, Marley Wade, who’d taken over her father’s general contractor duties on this job site.

Despite a measly three hours of sleep after his flight from Toronto had been delayed, Justin knew it was now or never. If this site held the key to Granddad’s death, when everyone discovered his identity as the new co-owner of Hunter Construction, they’d clam up faster than a guilty murder suspect lawyers up. Especially Ms. Wade.

He noticed other workers starting to arrive and, while opening his door, grabbed the letter from headquarters Jordan had given him.

Time to introduce himself to the boss.

He nodded to a few of the men who glanced his way with curiosity. At the trailer, he took the steps in two strides and gave the door a brisk rap. A muffled reply took a moment to decipher as permission to enter.

Marley Wade pulled her jeans over her hips, frowning at the interruption of her precious minutes. She expected punctuality from the men; no way could she be late.

The door creaked behind her, and she spun around in surprise. Her hands froze on the button of her jeans when she saw a man pause in the doorway of her trailer. A tall, blond man who—

Belatedly realizing he stared at her white cotton bra, she snatched a T-shirt out of her bag and stepped sideways so no one else could see inside from the job site.

For probably the first time in her life, Marley felt herself blush as she pulled her T-shirt over her head. The accompanying flutter in her stomach set her on edge. Men didn’t embarrass her. She was just one of the guys; always had been.

And he needed to stop looking at her like she was a new set of power tools on Christmas morning. 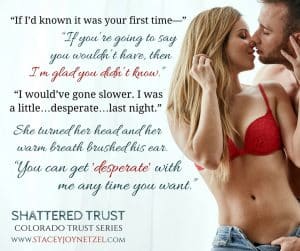