Home > Books > Trust in the Lawe

When the thief who stole his wallet shows up at his place of employment claiming to be his boss's long lost sister, Colton Lawe vows to reveal all her secrets. His search for the truth could put them all at risk.

TRUST IN THE LAWE, book 3

Kendra Zelner has three brothers: Eight-year old Noah she’s determined to protect, Joel has no clue she exists, and Robert wants her dead.

She takes Noah and flees their Manhattan home for Joel’s ranch in Colorado. Under the pretense of needing a job, she plans to hide out until her twenty-fifth birthday, when she’ll inherit her trust fund and legally gain custody of Noah away from Robert’s greedy hands. Unfortunately, her new-found brother’s sexy, infuriating ranch manager insists on demolishing her defenses and digging into her past.

Colton Lawe has good reason to suspect Joel’s beautiful, long-lost sister isn’t what she seems—the little liar stole from him! He silently vows to expose her secrets, but long hours together on the ranch fosters a friendship and attraction neither of them expects. Can Kendra trust Colton with the full truth before Robert tracks them down?

“I have a great respect for Stacey Joy Netzel and the way she can write a romantic story with sizzle and spice that kept me absolutely addicted.” ~ Val Pearson, You Gotta Read Reviews

After a distinct hesitation, she supplied, “New York.”

“The city or just the state?”

“Hmmm. This is a far cry from New York.”

A small smile curved her lips. “You can say that again.”

“I didn’t mean it literally.” Her smile widened.

The situation demanded he laugh with her, but he forced his attention off her smile. Once on the porch, he opened the door and stepped inside ahead of her. Then he waited. For the sound of her footsteps. For the thump of her bags hitting the floor. For the click of the door to assure privacy.

When he turned, she halted mid-sentence. Her apologetic expression gave way to an alarmed squeak when he grasped her upper arms and pushed her up against the wall. The bulk of his body gave her no room to move.

“Who the hell are you?” he demanded.

Stark fear dilated her pupils until her brown eyes were nearly black. Her breathing grew shallow, and she gulped twice before stuttering, “Y-you know wh-who I am.”

He tightened his grip on her shoulders, then became aware of how delicate they seemed under his large hands and forced himself to ease up. “I don’t believe it. You’re up to something, and you’ve got about five seconds to tell me what it is.”

Colton scoffed. “So, it’s merely coincidence that you robbed me this morning and then show up here claiming to be some long lost relative?”

“It’s nothing more than cruel coincidence—I swear to God.”

“Don’t you dare do that. I don’t buy one word of it.” He leaned closer, ignoring her trembling beneath his hands. “Who are you? What do you want with Joel?”

“He told you, I’m his sister. Please…all I want is a place to stay until my…until we get back on our feet. We have nowhere else to go.”

He caught her hesitation, saw a brief flash of panic, and wondered what she’d been about to say. He searched her expression for any kernel of truth to her words.

In the space of a heartbeat, he became aware of the heat of her vibrating body. If he leaned down a few inches, their lips would meet. His pulse thrummed. The urge to do just that was so great it left him shaken as he stared into her eyes. She was an untrustworthy, lying, thieving, scheming con artist.

And he’d never felt an immediate attraction like this in his life. 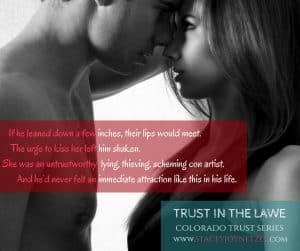