Sparks fly when a headstrong wrangler and an alpha park ranger are thrown together during the search for a poacher in RMNP. They fight sizzling attraction, but when the killer sets his sights on Brittany, Joel discovers he’ll do whatever it takes to protect her—even give his own life.

Having grown up under the excessive expectations of her CEO father, Brittany Lucas is as resistant to authority as the mustang she’s training for her boss. It’s a fault that lands her in more danger than she bargains for while camping in the back-country of the Rocky Mountain National Park.

Ranger Joel Morgan is used to having the upper hand in all his cases—until he runs into the headstrong blond while investigating disturbing incidents of poaching in the park. Brittany’s imprudent lie of omission awakens ghosts in his past, making the sizzling attraction between them unwelcome.

As he searches for evidence he can trust her, the monster mutilating wildlife turns his sights on Brittany, and Joel discovers he’ll do whatever it takes to protect her—even give his own life.

“Find anything interesting up there?” Randy Gifford asked.

“Just a camper in a restricted area.”

“You think it could be the guy you’re looking for?”

“It’s a woman. Camping where she shouldn’t be. I’m going to make sure she leaves in the morning, then return to my original route.”

“You may want to reconsider. That storm front I mentioned earlier is moving a lot faster than expected. It’s over the Never Summer Mountain Range and will reach your area tonight. Temperature’s dropping, too, so be prepared.”

Joel surveyed the heavy, gray clouds he’d noticed earlier. “What are they forecasting?”

“If it keeps moving, a couple inches. If it stalls, up to a foot.”

He muttered a curse. That would be a problem. “If that happens, we could be up here for a few days, so yeah, scrap the original route. The closest trailhead is Longs Peak, can you get someone to drop off my truck and trailer over there in the morning?”

Five minutes later, he rode back into Brittany Lucas’s camp as she threw a couple pieces of wood on the campfire that’d been nothing but banked coals when he left. She brushed off her hands before bracing them on her hips.

He dismounted to unpack his gear. “I’ll be camping here with you tonight.”

“Ranger Morgan, let me assure you, I have every intention of leaving in the morning.”

“And until then, I’ll make sure you stay safe.”

“I don’t need you to babysit me,” she insisted, irritation flooding her voice as she sat by the fire.

Ignoring the fact she’d heard him earlier, he met her stare over the top of Nobel’s saddle. “You got a gun?”

Her gaze faltered. “No.”

“Well, the poacher does, so I’m staying.” That shut her up, until he tossed his sleeping bag inside her tent. 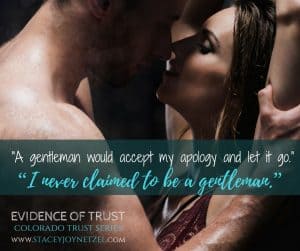