She's planting roots in his hometown; he can't wait to leave again. But when someone believes in you, there really is no place like home.

Nine years ago, Alex Riley left home in handcuffs. Now he’s back in Pulaski with a chip on his shoulder bigger than the Grand Canyon—especially when a freak accident with the town’s beloved Santa Butch forces him into an Easter Bunny costume minutes after arriving. Worse, the man blackmails him into an extended stay helping out at the new teen center being built by the beautiful but righteous Ms. Emma Winston.

Former social worker Emma Winston is used to dealing with surly teenagers in a composed, encouraging manner, yet her first encounters with Alex make her want to smack the man. His first day at her construction site, she’s distressed to realize she also wants to kiss him—even with his disagreeable attitude. She knows better than to fall for a bad boy who’s made no secret he can’t wait to leave the town where, for the first time in her life, she’s planting deep roots. But the more she glimpses beneath his gruff exterior, the harder it is to remember they don’t share the same dream.
EXCERPT:

“Why are you afraid of me?”

The gruff question sent her chin up a notch. “I’m not.”

“Yes you are. Whenever I get within two feet of you you’re like the Scarecrow getting too close to fire. Is it because of what Nash said?”

“No.” The thought that it was bothered him, she realized. “I’m not afraid,” she insisted, even as she inched backward.

Of course she was lying, but not for the reason he thought. With his dark, good-looks, all that rugged stubble on his jaw, and the sexy rasp of his voice, the man made her insides quiver like Jello.

God, she was officially screwed up.

As he continued to watch her, irritation flared and she blurted out the truth. “I don’t like the way you make me feel.”

His gaze narrowed for a long, considering moment. And then suddenly, he didn’t look so displeased. He took another step closer. When she backed up, he stalked each step she took across the room until her shoulder blades hit the wall.

“Stop it.” Her voice quivered as she held up a hand to keep him from taking the last few steps.

“Not until you answer my question.” He tried to take hold of her hand, but she tugged free to flatten it against the wall at her side.

“Nervous,” she admitted desperately. “Like I can’t catch my breath.”

A small smile tugged at the corners of his mouth, and her gaze riveted on the movement.

“With anyone, or with me?” His smile disappeared when she didn’t answer. “Because I was in prison?”

“No.” Maybe a little. It made sense she was gun-shy with her ex still behind bars. Didn’t it?

He dropped the roller in his hand. She flinched as it hit the ground, the sound echoing in the empty room.

Alex took another step closer, leaving barely twelve inches of space between them. “Aren’t you even going to ask?”

“What I did to get locked up?”

“I don’t want to know.” Liar. It’s killing you not to know. Though Nash had called him a thief, so she had a bit of a clue.

“Because it won’t matter.” That much was true.

“It matters,” he argued. “You’re not the only one who feels the heat.”

“I’ve wanted to kiss you since the hospital,” he admitted, “but I thought you were afraid of me.”

That bothered him, too, she saw, and explained his frequent frowns over the past week.

But not now. Now that he knew different, it appeared she was in trouble. Especially with his gaze currently fixed on her mouth.

Curbing the reflex to wet her lips, she asked, “How long have you been back in Pulaski, Alex?”

The abrupt change of subject seemed to catch him off guard. “A week.”

“And how long do you plan to stay?”

His shoulders lifted in a shrug. “At least until you get Butch back to help.”

Only a couple more weeks. “And after that?”

When his gaze met hers again, he had the look of a cornered animal, even though she was the one with her back up against the wall.

“How long were you at your last job?” she pressed. “And the one before that? Or any of them since you were released?”

Surprise flickered in his eyes. He clearly hadn’t expected her to read him so accurately, even though she’d mostly guessed.

“I’m putting down roots in this town,” she said. “You pulled yours out a long time ago. I want a family, and you’ve thrown yours away. I never want to leave, and you’re never going to stay. That’s why I don’t like the way you make me feel.” She drew in a breath and forced the next words out. “That’s why I want you to go away.”

You’re dangerous, Alex Riley. So very dangerous, because everything I just said makes me want to cry. 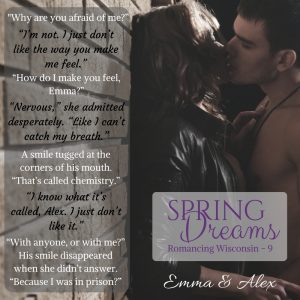