He has one month to make his bride fall in love with him before he deploys.

He has one month to make his bride fall in love with him before he deploys.

Kyra Sullivan has been left one too many times. If her father can walk out on his wife and children—twice—what’s to keep a man by her side? She doesn’t believe anyone will stay long enough to give her a happily ever after, until one night with Staff Sergeant Dane Owens opens her heart to dream.

But Dane has secrets. Obligations. Orders. Staying isn’t an option, and even worse, he has a feeling he’s not coming back alive this time. An honorable man would leave Kyra alone, but the moment he sees her again, walking away proves impossible. Can he convince her not being able to stay is different than leaving, or is he damned to repeat the past by once again ruining the life of someone he loves?

While connected by a common world, all books in the Romancing Wisconsin Series are standalones with their own Happily Ever After. 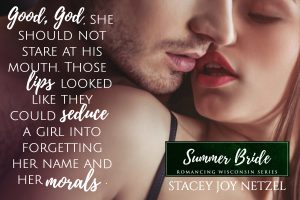 “What kind of ridiculous questions do you think they’ll be asking down there?”

He shifted in his seat beside her, his denim-covered thigh brushing against her knee. He didn’t move it away as he offered, “Probably something like, where’d you first meet?”

Heat from his body warmed through her leggings, and she left her leg right where it was. “I was thinking more like, does he put the toilet seat down?”

“Yeah, that’s a good one. How about, what’s his favorite sports team?”

“Or hers,” Kyra countered. “Women do like sports, too.”

“Sure. But I kinda like, does she wear a bikini or one-piece?”

She laughed. “Of course you would.”

“It’s better than, what’s her most irritating habit? Right?”

“Not if they added in the bedroom.” Heat flooded her face for going there, and yet she was sure that’s exactly where the contest would go. Things like this always ended up about sex.

“Then the question would have to be, what’s your favorite thing she does in the bedroom?” He cut her a sideways grin. “Or he does.”

Good God, she should not stare at his mouth. Those lips looked like they could seduce a girl into forgetting her name and her morals. Hell, even now she was having a hard time drawing a steady breath. She quickly averted her gaze back to the stage. “And then there’s always the classic, where’s his favorite place to make whoopee?”

She barely had time to register he’d shifted closer as his breath stirred the hair near her ear and his low voice sent a reactive zinger straight to her core. “I wasn’t actually asking you,” she admonished—though she didn’t lean away from him, either.

“I’m not answering that.” His husky chuckle had the same effect as his warm breath against her neck, and Kyra desperately redirected the conversation. “It all seems stupid to me. Answer a bunch of questions to show how much you know about each other. As if that proves you have what it takes to be together forever.”

Dane shifted in his seat, easing away from her, and she grimaced when she realized how judgmental she’d sounded. “I’m sorry. I forgot you have a friend down there. My jaded side is showing, so just ignore me.”

“You can’t be jaded at twenty-five.”

“I’ve been jaded since I was sixteen,” she quipped without thinking.

Kyra shrugged and pushed her ring back over her knuckle. Last thing she wanted to do was talk about her no-good, thieving, deserter of a father.

Another shift brought Dane closer once more as he leaned his elbow on the arm rest and rubbed a knuckle against the dark bristles on his jaw. It was impossible not to notice how the black leather wrist cuff with silver accents enhanced the corded muscles of his tanned forearm. There was also a thin, brown leather strip double wrapped around his wrist, adorned with three black beads, and one silver.

“I actually agree with you on this whole fiancé contest,” he said. “It’s just a big advertising gimmick. But we both know people have done a lot stupider things for a lot less than fifty grand.”

Diverted from her mental drooling, she glanced up at his face with a frown. “Fifty grand?”

“The winners get fifty-thousand dollars.”

She straightened in her seat to stare at the stage in disbelief. “Seriously?”

“Yeah,” he confirmed. “You didn’t see that on the sign when you came in?”

“I was a little distracted.” A lot distracted to miss something that big. Wow. Fifty thousand dollars for a couple to start their life with…and how many of them down there would blow it on a big lavish wedding, only to get divorced a year or two later?

Kyra frowned in Dane’s direction again. “We? As in you and me?”

“Yeah. Think about it. They’ve billed this contest to be all about these couples proving how well they know and love each other. Right?”

“And you say that doesn’t prove they’re meant to be together.”

“It doesn’t,” she insisted.

“Then imagine if someone—two someones”—he gestured between the two of them—“who know nothing at all about each other gave it a whirl?”