Two years ago, Raelyn Scott left a baby on her brother’s front porch in Wisconsin. No one knew why, or where she went—until now. <br><br>

Two years ago, she left her baby on her brother’s front porch in Wisconsin. No one knew why, or where she went—until now.

Leaving her baby with a brother no one knew about is the only way Raelyn Scott could protect little Ella, her brother, and herself. Trust no one has been her motto to survive by—until her sexy diner customer, Josh, saves her from the man she fears most.

Private investigator Josh Burke finds himself falling for the guarded beauty before he can suss out the information he’s been hired to expose. He’s beginning to doubt the facts of the case, and lying to the first person to believe in his worth since leaving the military eats away at his rigid sense of honor. But if he tells Rae the truth about why he was in the diner that day, she’ll disappear from his life forever.

While Summer Secrets is the 15th book in the Romancing Wisconsin series, all of them can be read as standalones within the series.

Also to note, you can read about Rae’s brother’s story in Autumn Wish (book 5).

Raelyn Scott glanced up, automatically responding to her alias as well as her co-worker’s sing-song teasing. She already knew her repeat customer had taken a seat at the far booth by the window almost five minutes ago. The hairs on the back of her neck had prickled from the moment he’d entered Truck & Chuck, and her body warmed from head to toe. She wished it was from the rush of August Louisiana heat whenever the door opened, but it was all the man.

They had bonded the first day over a shared northern Midwest accent. Her pulse had blipped upon hearing he’d grown up in the Madison, Wisconsin area, but she’d assured herself sometimes coincidences were just that.

Now, his appearance a fifth day in a row ratcheted up her nerves another notch from yesterday.

“I saw him,” she told Molly while adjusting the ties of her apron at the low waistband of her jeans.

“What are you making him wait for?” The voluptuous, bubbly blond bumped her shoulder against Rae’s as she slid an order ticket across the serving window to Dave, Truck & Chuck’s owner and day cook. “If I had that hot hunk of man sitting at my booth every day, I’d be all over him.”

Rae snuck a quick peek. Guessing him to be in his late twenties or early thirties, she acknowledged he was definitely one hot hunk of man. Dark hair, arched eyebrows, sexy-as-all-hell green eyes with thick lashes some women paid a fortune for.

He stood three or four inches taller than her own five-foot-six, and had a lean, compact build of solid muscle. She’d verified the firmness of those muscles when she’d collided with him on her way out of the restroom yesterday. In the shadowed hallway, he’d caught her close for a breathless moment before stepping back to give her some space with a murmured apology. The warm flicker of interest in his eyes had given her stomach a little flip.

“He’s only in town on business for a week or so,” she told Molly.

She added the or so because he hadn’t been real specific with his timeframe—or much else, for that matter. His casually guarded responses had made it that much easier to suppress an unexpected urge to flirt with the guy.

“Doesn’t matter how long he’s in town,” Molly said, “Have yourself a little fun, girl.”

Dave put table fourteen’s order up under the heat lamps, and Rae reached for the plates. “I don’t even know his last name.”

“Maybe for you.” She grinned without judgment, balancing both plates in her hand and left forearm so she could grab a pot of regular coffee and back toward her customers on the other side of the diner. “I prefer to take things a bit slower than jumping his bones out in the parking lot.”

Like a lot slower. Especially with the ghosts of her indiscreet past haunting the back of her mind.

Molly laughed, completely unapologetic about how she occasionally spent her break time. With a shake of her head, Rae spun around toward her tables.

Josh What’s-His-Last-Name looked up from his Sudoku puzzle book when she paused at his booth. The window looked out toward the north-bound lane of I-55 heading out of New Orleans, but his unfathomable green gaze fixed on her, making her pulse race in a most disturbing way.

She filled his up-turned mug, then set the pot down on the silver-edged, cream Formica table top. “I’ll be back with you in a moment.”

His wry tone told her he was well aware she’d purposely kept him waiting already. The thing was, she couldn’t quite get a read on the guy, and she didn’t like it. She didn’t trust the unknown, no matter how nice he seemed, or how good he looked with that maroon T-shirt molding every muscle in his chest and torso. The dark gray baseball cap he always wore but politely removed while inside rested on the seat next to his denim-clad thigh.

She delivered the plates to the couple at table fourteen, then took a fortifying breath before returning to his booth. He leaned back, resting his right arm across the back of the seat. She’d noticed he was a lefty, and his left forearm braced on the edge of the table as he tapped the eraser of his pencil on the puzzle book in front of him.

“Josh.” She leaned her hip against the side of the opposite booth seat with a slight tilt of her head. “What’s your last name?”

His jaw tightened for a brief moment, then relaxed. “What do you need my last name for?”

Whenever she asked him a personal question, he diverted with a question of his own, or found some way to skirt around a direct answer. Of course, she hadn’t been entirely forthcoming with him, either, but he wouldn’t know that. Everyone here at the diner knew her as Lynsey, so he had no reason to doubt her word.

Before she could give him a plausible reason, her co-worker chimed in over her shoulder with a stage whisper. “She won’t have sex with you if she doesn’t know your last name.”

The blond breezed away with an evil little laugh as Josh’s lips quirked up in a grin. “Burke. My last name is Burke.”

Oh, boy. That smile was something else. Confident and cocky and wreaking all kinds of havoc on her vulnerable insides as his gaze flicked down over her basic black T-shirt. She didn’t like being so physically attracted to a man she didn’t trust. Then again, she wasn’t sure there was a man alive she could trust—except her brother.

She glanced down while pulling her order pad and pen from her apron pocket. When she looked up again, her gaze snagged on the definition in Josh Burke’s outstretched arm. Determined not to stare, she shifted her attention to the closed menu on the table.

“Know what you want?”

When he didn’t add anything more, she lifted her gaze, eyebrows arched. That smile still flirted on his lips, making Rae’s heart hammer out of sync. Resigned to the humor Molly had stirred up, she grinned back but refused to add any more prompts. He knew what she was waiting for, same as she knew why he paused.

After one more pulse-tripping beat of hesitation, he relented. “B.L.T. Club with fries.”

She didn’t have to ask what kind on this fifth day. He ordered different sandwiches each time, but the pie had remained the same. Apple a la mode—don’t heat the cold pie before adding the ice cream. She darted a glance at his trim waist. How’d he get away with fries and pie and ice cream on a daily basis and still keep those abs so tight?

Forcing thoughts of his hard abs from her mind, she picked up the coffee pot and turned toward the kitchen. “I’ll put this right in.”

Rae made her way behind the long counter, fighting the itch to turn back and study the man. Each day he sat for coffee and lunch, and then another extra hour to do his puzzles while he ate his ice cream first, then the pie, bite by slow bite. To anyone else, she was sure he appeared as casual and relaxed as he pretended. She sensed an underlying tension, as if he wasn’t quite who he presented. 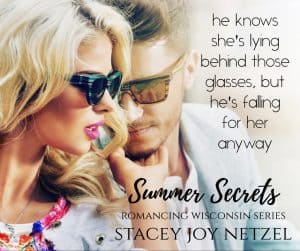